Pants to Running – in celebration of Runderwear

It’s pants!   They’ve come.  After much procrastination, I finally got round to ordering some and now they are here, look: 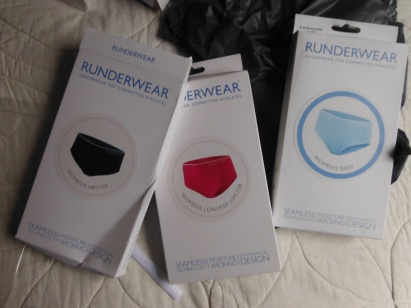 I am a committed athlete.  This is official, and the evidence is here for all to see.  I am now in possession of my newly purchased Runderwear, and it says on the box VERY CLEARLY INDEED that basically, if you are anything less than a committed athlete, it would be not just irresponsible, but dangerous to wear them.  When marketing companies talk about being a ‘committed athlete‘ that’s pretty much synonymous with being ‘enormously talented and accomplished’ mostly.  I mean, to be fair, we all have our off days, and some of us (well OK, me for example) might be working towards being ‘enormously talented and accomplished’ rather than actual secure in that status just yet, but basically, now I have my go-faster, no-chaffing runderwear, my running credentials are secured in perpetuity.  Have pants, will run!  ‘Don’t stop me now as I’m having a good time‘ (as the song says, though granted it doesn’t differentiate between type 1 and type 2 fun). 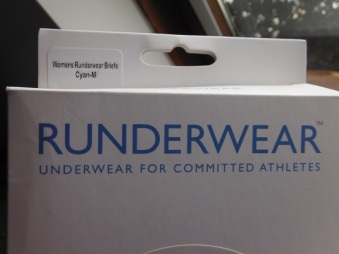 Sooo, obviously, excited and delighted to be in receipt of my new runderwear, next challenge was to give them a literal and metaphorical test run.  I began by just wearing my pants around the house.  They are ‘low rise hipsters‘, according to the label on the box,  though the company seem to take it on trust that you are qualified to wear them.  I personally don’t have a full beard, though I do have an arrangement with many female friends to come and visit me at my hospital bed with tweezers to sort out my rogue chin hairs if ever I end up in a coma.  A living will of sorts in fact.  I also got a pair of ‘briefs’ and an ordinary ‘hipster’, so I could work out which style of runderwear I liked the best, but, honestly, they look very similar to me.  They don’t come with any instructions so I put them on the wrong way round at first (surely that nice star logo should be at the front), but I got there in the end without outside assistance, so I’m sure you will too.  Don’t be scared.

They are all however super-comfy.  I wont lie, they aren’t the most flattering of undergarments I’ve ever worn (and I have worn some shockers in my time), but they do feel lovely.  Anyway, who’s going to see them apart from other runners who are taking a professional interest in such matters? –  and flashing your pants at fellow athletes at the start of parkrun say, is perfectly respectable.   Personally, I’ve never risked running commando, but I’d say these really do feel like you aren’t wearing anything at all down under (pants wise, I still wore my running leggings on top).  I think these pants and I are going to be friends. Runderwear Ambassador, you weren’t lying, these could indeed change my life!  For this I thank you.  Sorry it took me so long to see the light.  Here is a photo of our local Runderwear ambassador in action, you can really see how having the correct pants helps with running technique here.

I had been toying with doing the last Trunce of the season in any case, but these newly arrived knickers had me chomping at the proverbial bit to get out there and run and see how they would fare put through their paces.  I can truthfully say I haven’t been so excited to be in possession of new pants since Independence Day 1999! (Pretentious reference coming up alert).

I was on holiday in Peru when I availed myself of a local laundry service.  Because I’d been travelling for a while, I handed over all my sordid clothing in one huge heap to a local woman for washing.  And I mean, all of it, I kept back only what I was wearing throwing caution to the wind.  The following day, it all came back, beautifully cleaned, ironed and folded and I paid the requisite fee.  It was only when I started going through it all, I realised that every single pair of my faded and tatty M&S knickers was missing.  I was left only with the pair I stood up in.  Even at the time I found this hilarious.  Frankly, if someone was desperate enough to want to keep my knickers I could not begrudge them this, but it did lead to a practical challenge in terms of replacing them.  The quest to buy knickers clarified why my M&S cheap and cheerfuls might have been so highly prized.  Knickers were nowhere to be found.  It was several days later before I finally came across a three pack in a market in some other Peruvian town.  They literally, had my name on!  I was soooooooooooo excited.   I had to have them.  I can’t remember now what they cost, but I do remember they were lemon yellow and had no elastic so were essentially completely useless.  Wouldn’t have been any good running say, but they brought me much joy, as you can see.  No it isn’t a picture of me wearing them, don’t be silly.

Actually, that’s the only thing that would have made me like my Runderwear delivery more, having my name emblazoned on the outside of every pack as an integral part of the packaging design.  It would make shopping choice for running gear so much more straightforward if the most suitable kit did always have your name on it.  I wonder when suppliers will wake up to the potential of such an innovation.

So, have pants, will run.   Test run to take place tackling the Trunce.  You’ll have to wait for my next post to find out how both they and I fared… Ooooh the excitement, the anticipation.  I know, who’d have thought it only took some new knickers to refresh and refocus my running ambitions.  Just goes to show – Top Tip everyone  – the secret of continuing to run is understanding what motivates you.  For me, today, it was discovering for myself the joyful potential of runderwear!

I know, who’d have thought it eh?

7 thoughts on “Pants to Running – in celebration of Runderwear”