I want it to end now.  The challenges are getting more and more extreme, but we have become so conditioned by our Smiley Elder Super Geek that we can’t even entertain the idea of failure.  The only option is to rise to face the new dawn and find out what it is we are really capable of. Of course, I’m back to Smiletastic, will it never stop?

So it seems our hearts are not enough. We are now required to conjure up a vision of an Easter Bunny for, well, Easter actually – you might have been ahead of me there.  I thought a heart was hard enough, but a rabbit?  Seriously?  I turned to Strava art to get some ideas:

They didn’t really help to be honest.  I think an element of lateral thinking will be required to execute this command on the streets of Sheffield.  I briefly considered submitting one of the above rabbit offerings as my own, but whilst I’m confident I could blag the creativity aspect in terms of shape, I don’t think our judge and jury Smiley Elder Super Geek will be buying the 63.1 miles in distance covered in 4:22:23 of  moving time along with 2,285 feet of elevation.  I may have improved somewhat during Smiletastic, but I have to concede Super Geek might consider that to be a statistically significant jump in performance and promises to take our Strava submissions on trust on the whole, might be tested…  I needed a better plan.  The better plan, was to have first a minor tantrum about the intrinsic hardness of it all, then a major meltdown because there are absolutely NO RABBIT shapes to be found in the whole of Sheffield.  Then finally, the germ of an idea….  Rabbits are shy creatures, even an Easter Bunny  needs to be given some sort of an incentive if it is to make an appearance.  The solution, when it came to me, was actually exquisitely simple.  I would lay bait.  First option, carrots.  All rabbits like carrots right?  Admittedly, it is a somewhat mis-shapen one, but that is because it is organic, which makes it both healthier, and hopefully more appealing too.  What do you think?  Personally, I think it is a respectable enough offering, if a little lacking in symmetry at the top, it nevertheless has an appetising chunkiness.  A reasonable start I’d venture… 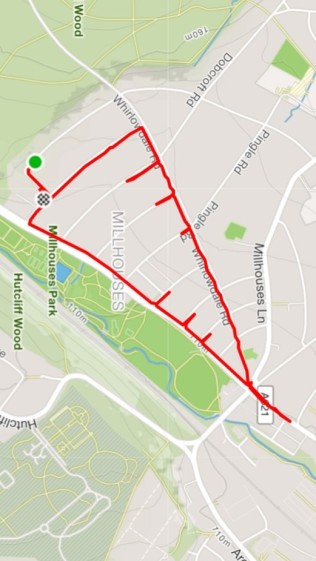 I also figured, possibly with naive optimism that would soon be knocked out of me, that by laying out my bait early on in the challenge, I could thus lay claim to any rabbits – be they Eater Bunnies or March Hares or otherwise, that subsequently appeared within a say ten mile radius of the epicentre of said organic carrot within the month of March.  This could conceivably give the Fighting Feathers a needed competitive edge, it’s all feeling a bit precarious what with various members of our team selfishly breaking body parts through stress fractures of the ankle or exploding calves and such like, thereby diminishing our collective resources.  I don’t mean cattle that explode by the way, that would be silly, I mean calf muscles as in back of the leg, just for clarification.

So, after much agonising poring over Google maps on an over-heating laptop, I finally had a cunning plan!  It would depend on being able to access inaccessible areas, it will also require an appreciation of what may loosely be termed ‘primitive art’ on the part of our arbitrating Smiley Elder Super Geek – but these are desperate times, desperate measures are called for.  Reader, meet my bunny: 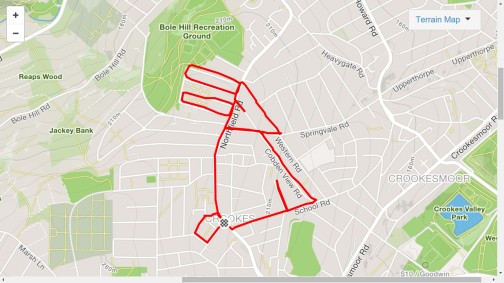 It was quite hard coming up with this genius creation. I think it might be true that Genius is 1% inspiration and 99% perspiration.  After getting into the zone by bunny hopping drills with Accelerate as part of their Ecclesall Woods session earlier on, I decided to act whilst the muse was upon me, and headed off to Crookes post session to execute my plan  I maintain that even carrying a map around these Strava Art projects are really challenging. You (or I do at least) get really confused as you have to sort of back track on yourself, it’s quite disorientating.  It is also quite anti-social/ somewhat embarrassing to execute.  Now this is saying something as I have developed quite a high tolerance level to social embarrassment due to having over half a century’s worth of experience of being seen in public despite my many and manifest physical inadequacies compounded with my highly advanced and honed tendencies for more general social ineptitude.  However, even I have found this tough.  It seems it is indeed true one must suffer for one’s art… 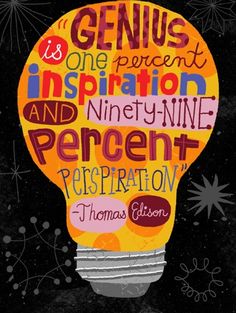 The problem is once you set upon a path, you need to stick to it, so social niceties like say, giving way to people pushing buggies, or smiling to drivers who are gesturing to give way so you can deviate from your route and cross the road in front of them for example, are abandoned.  No.  I DO NOT WANT to take up your offer of crossing the road.  NO!  I will not step aside and spoil my Strava line, even though I can see you are a loved up couple holding hands (well, especially then to be fair), and NO!  My bunny demands I must shun the etiquette book that suggests it is polite and indeed usual to give way to the OAP shopping group all clutching their sticks or gripping the bars of their zimmer frames.  It is  a tricky one.  Yet, I must keep my resolve, undaunted that people are surprisingly unsympathetic and uncomprehending when you try and explain about Smiletastic and Srava Art and the burning necessity of creating a rabbit just now, but last time it was a heart.  People are strange aren’t they?  I’ve since Googled ‘etiquette’ and it seems that I’d have been OK if I’d been wearing a bustle, as people tend to give way to women so attired.  Seems I need to invest in some new running kit for future Strava art challenges, will check out wiggle just as soon as I’ve finished this post:

The hardest bit, but also the least effectively executed in the resulting Strava shape, was the eye of the bunny.  Which is a bit like the eye of a Tiger only not the same thing at all.  I turned off my TomTom, went to the middle of the road in the face shape, turned it back on  and ran backwards and forwards loads of times in the same spot to try and create the eye.  Then turned it off, returned to the outer perimeter of the face, TomTom back on, and continued.  It just didn’t work, for some reason the Strava trace has linked that all as one bit.  I wouldn’t mind so much, but there was a woman carrying shopping who walked really, really slowly by as I was executing this particular bit of art work, and she was definitely looking at me askance throughout.  Oh well, I still think the effect was a gesture in the right direction, and I’m not putting myself through that again, especially when the forecast is for heavy snow and also I want to drink tea now and not go out again until I’ve warmed up at least.

Anyway, I’m feeling pretty confident, compare and contrast, my Strava Art rabbit, and an actual rabbit. My Strava Art is the one on the right, just so you know: 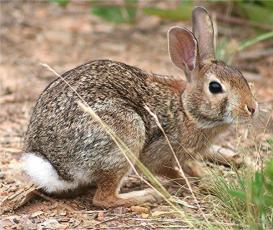 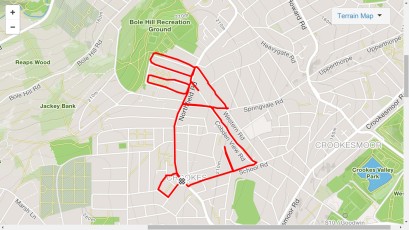