Digested read:  Smiley Paces are ten this year.  Hurrah.  So happy to be part of such an awesome running club.

It’s our tenth birthday this year.  Yay!  I don’t normally do birthdays, viewing them more as a cause of bitter reflection and regret about what might have been, compounded by the reality of having no-one with whom to celebrate whatever arbitrary age I may have unexpectedly alighted on.  Astonishingly tear-stained, slurring friends aren’t the best of company on their birthday or indeed any other day of the year.  However, it’s different when you are celebrating a milestone like this one. Ten years of collective and individual awesomeness from the members of the Smiley Paces running club of which I feel extremely blessed to be part.

In case you don’t know, Smiley Paces are eh hem (it’s on the website so it must be true):

The SMILEY PACES are an informal Sheffield based women’s running group.

We formed as a small group of like minded women up for a challenge and have morphed in to a large, diverse group with a wide range of ages and abilities.

and who doesn’t like Morph?  Plus Morph also enjoys running with running buddies, as do we Smilies.  Good to know.

So we are having a shindig of some sort at the weekend, and members have been asked to think about any little nuggets of Smiley gold they wanted to share that might go into a presentation celebrating the Smiley ethos and achievements over the years. So that got me thinking. What happened that I ended up being part of this amazing group of funny, talented, inspirational and strong Sheffield women?

I have no innate running talent, or indeed any sporting prowess.  It follows therefore that joining Smiley Paces was pretty much inadvertent, almost an accident.  I started going to parkrun, and obviously that’s a gateway drug to the ‘running community’.  There I came across members of various running clubs, but it just happened that my more immediate friends and acquaintances were Smilies.  I don’t remember making a conscious decision to join really, only that it was only £2 a year to join at that point (it’s now rocketed up to an eye-watering £7.50 a year), so I couldn’t really think of any reasons not to, even though I didn’t really know what a running club was even at that point.  I’m pretty sure meeting for coffee got mentioned more than the running before you get to drink it bit…  I think I got lucky with landing on Smilies (whether that feeling is reciprocated or not I shall not explore here).  There are loads of running clubs in Sheffield, that cater for any and all running  enthusiasms. That’s great, but personally, I don’t think I’d have survived, let alone thrived in some of those with a much more competitive or ‘every runner for themselves on the hills’ ethos.  There are lots of friendly and inclusive running clubs out there I know, but I still feel quite emotional about having ended up part of the Smiley gang.  I know, I think on it and I weep.  Me and running, it’s complicated….

Now, don’t get me wrong, it’s not all great. For one thing, the Smiley vest is not a blessing to my particular physique, and I had to get a special size ordered to accommodate me which was pretty humiliating. However, on the plus side (in every sense) it is instantly recognisable, and whatever your take on comic sans, it has a cheery vibe.  One of the (many) best things about being a Smiley is that it is such a recognisable kit that you can take part in pretty much any event, anywhere and attract a shout of  ‘Go Smiley’, and that is super encouraging.  I remember doing the TenTenTen some years back, and seeing someone (I know now it to have been Dr Smiley) had put up some ‘Go Smiley’ placards through the woods. It was the best thing EVER.

So what’s so great about Smiley Paces.

That’s so hard!  So many things.

It’s about opening up the peak district to me as an outsider.  Stunning routes across Stanage and Burbage and further afield.  It’s about taking on challenges I never thought I’d be capable of.  It’s about having a network of hilarious, inspirational women with whom you can cry with laughter or yomp through bogs.  It’s about coming to understand that everyone has their own goals and that’s fine. It’s about feeling supported.   It’s about friendships and shared adventures.  It’s about finding your limits as well as the ultimate non-chaffing gear.  It’s about people who bring out the best in you, and yes, making a snow-dragonfly as part of a Smiletastic challenge most definitely fulfils that criteria. 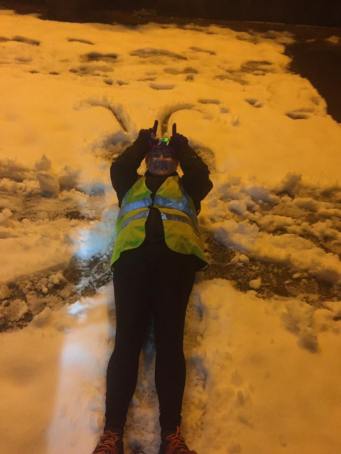 I was so intimidated by ‘proper runners’ when I started out, I’m still in awe of them, but would say inspired rather than intimidated these days.  What has been so extraordinary to me is that even though I’m not in the same league as many Smilies, I’ve had nothing but support when embarking on new challenges.  Nobody has ever laughed in my face when I’ve dared to venture the beginnings of an idea to do something I previously considered impossible.  Instead I’ve had advice, time given, kit lent.  When I’ve been downcast and confessed in a blog post about e.g. chaffing injuries or my quest for a decent bra of how to find my way off a ridge I’ve had a little flurry of messages offering practical advice as well as empathy.  How awesome is that.  I’m grateful for all of these things, and it’s really difficult to pick a single outstanding moment because there have been so many.   For illustrative purposes:

Smiley London trip, and having my Smiley buddies not just once, but twice, interrupt their parkruns at the parkrun Mecca that is Bushy parkrun to say hello to/ high five and/or get a photo with my mum. Love you guys!

Smiletastic challenges – running in the snow, chasing down the alphabet in Attercliffe trying my  legs at Strava Art.

A mass Smiley exodus to the Lakes for the Dirty Double.  My that was an adventure.  Love my Smiley Buddies.  Oh, that was the year before, but still vivid in my memory

Getting to the London Marathon, and en route, spotting Smilies shouting support from the sidelines.  Most brilliant thing EVER.

The Hathersage Hurtle in a heat wave, walking it was a good move and way more fun than the collapsing with heatstroke half way round option which was also available to running smilies 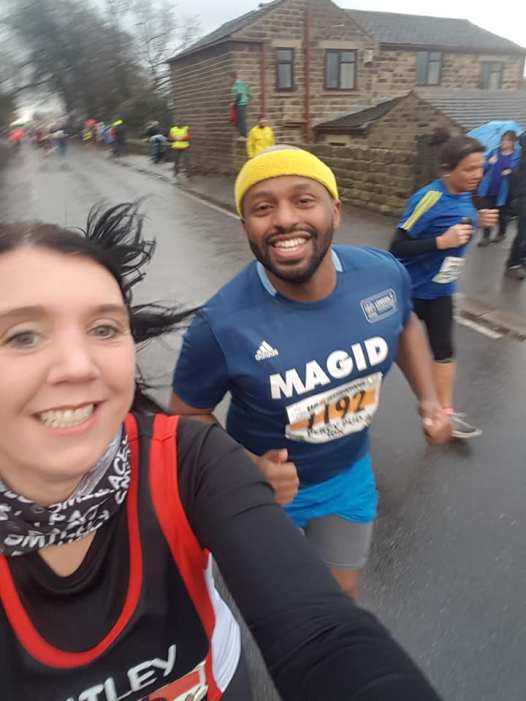 Bottom line is, having Smiley Paces buddies around is an asset on any occasion, running related or otherwise.  Life is always better with a Smiley on hand to share the moment.  Also, even when you go out running on your own, you are pretty sure to come across a Smiley, I keep meeting this one – she’s always covering twice the distance at four times the speed, but not too busy to stop and say hello!

However, if you are going to make me pick just one, it would be when I embarked on what may be my first ultra, the Dig Deep 30.   I’m hoping not my last, but really, who knows?

So many memories for me from this.  It trumped the London Marathon in so many ways. All the smilies that helped me with route recces and advice, and then on the day having Dr Smiley come and wave me off.  Couldn’t believe it, best thing ever! 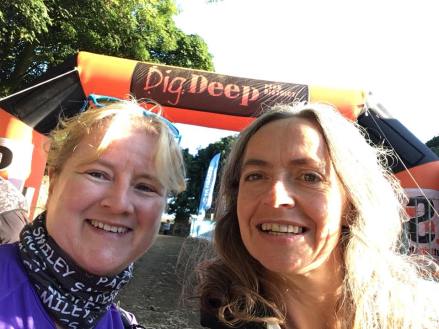 I was not a promising candidate for this, I had Smiley buddies out recceing sections with me, pointing out sections on maps and recommending kit in the build up to it.  On the Day of the Dig Deep 2018 itself, I didn’t even run it, just walked it for the most part, and I was out for  hours after all the other thirty milers had finished, packed up, had tea, and possibly even gone to bed.  The most amazing sight ever then, was coming back across Houndkirk and being greeted by supportive Smilies.  I honestly thought they were there by co-incidence at first, but no, they’d been out there looking for me and waiting too.  I just couldn’t believe it.  They ran with me for a bit before heading off to cheer me through the finish.  Then coming down through Limb valley in the evening dusk there were more messages of Smiley origin scrawled into the mud to keep me going til the end.  It was just astounding to me that my Smiley buddies had waited out so long and were so encouraging.  I actually feel quite emotional remembering it.  When I came through the finish to a Smiley cheer in the gloaming it was just fantastic. 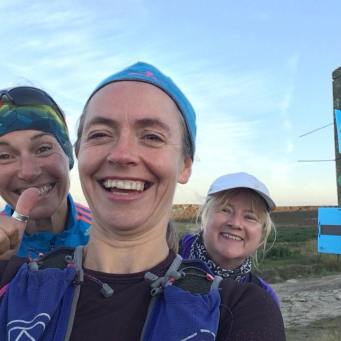 Basically, being part of Smiley Paces is like having on tap access to a collective supportive hug. Whether that’s celebrating achievements, motivating each other to try new things; commiserating through injury or swapping tips on where to access the best coffee and cake options you can’t beat em.  Can’t beat ’em, so may as well join ’em. Glad I did.

Here are some Smiley moments. There will be more… 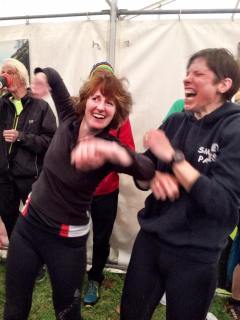 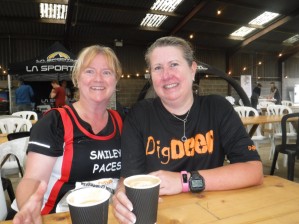 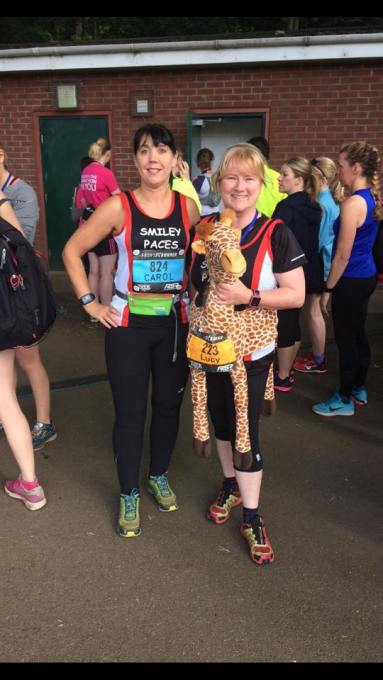 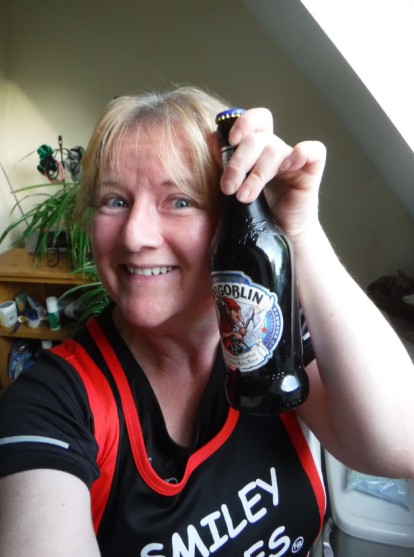 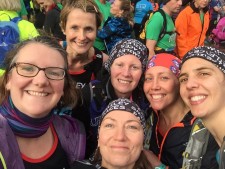 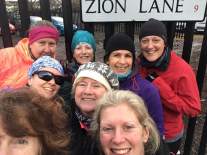 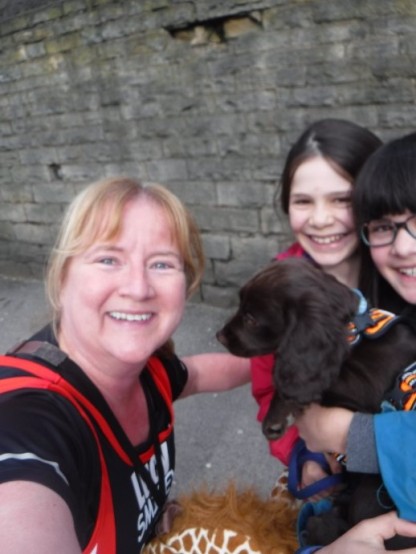 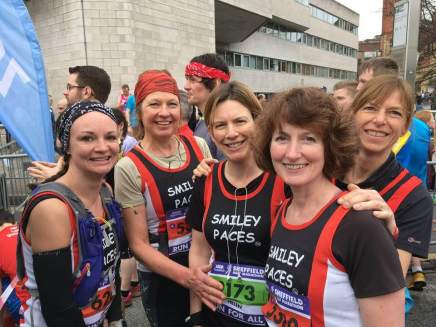 It is also about an embryonic smiley offshoot dragonfly book club, and it may even one day be about completing a crochet woodland blanket, but that chapter of this metaphorical book is as yet unfinished.

What’s more just when you thought it couldn’t get any better, we had our awards do last night and this!

Happy Birthday to us!