Sheffield Hallam parkrun 421, the Run Report that never was.

Digested read:  one of my intended projects for 2019 was to have a stab at producing a run report.  I have been gifted an amazing excel pivot widget thingamajig courtesy of the fine folk of Graves parkrun in general and Stephen Gilmer in particular.  Who knew what sorcery could be executed with parkrun results stats thanks to such a tool.  I never thought I’d spontaneously bow down in worship at the potential of a spreadsheet, but really, up til now I’ve never lived, Excel wise.  Now, well life feels different somehow.  A whole new world of possibilities. Smiley Elder, I finally understand!

So I’ve had a stab at a run report, but it’s not made the cut for the official parkrun page, however, as it’s done now, here it is anyway.  A one off special. A rogue run report.  Not so much rebel runner, as rebel reporter.  Go me.  Perhaps it is no co-incidence my finish position was 666 today, the devil in me will out!  You can embrace your inner anarchist by reading on if you dare.  Also, on the plus side, I can put in extra photos now, and indulge my own idiosyncrasies with abandon so every cloud has a silver lining as the saying goes, or is it every silver lining has its cloud?  Oh I forget.

Welcome back to Sheffield Hallam’s first parkrun of 2019.  It’s a new year, it’s a new dawn but it’s the same glorious parkfun at parkrun.

On a crisp and distinctly nippy morning, 711 parkrunners took to the park to run, walk, jog the 5k parkrun course at Sheffield Hallam’s 421st event.  Thanks to awesome volunteers, the event ran smoothly, inasmuch as nobody fell in the lake (as far as this run report writer is aware) nobody got lost and everybody had fun. Yay!

A special mention to our very own Finlay for his fabulous vocal power in gathering together the first timers for their briefing, which was actually delivered courtesy of Bernie, no artificial aids to voice projection were required there.  We salute you! 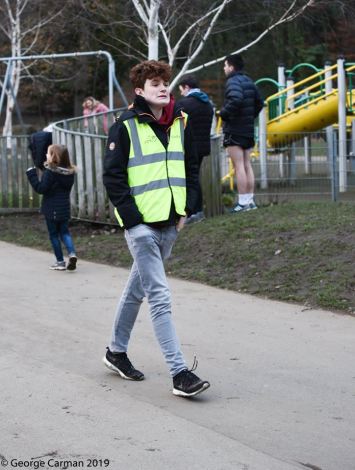 Sandi was in fine form as the first Run Director to kick off the new year, and reminded runners of the few rules we all need to adhere to, to ensure the continuing of this parkrun.  We are a large and mainly cheery crowd, but it is important to avoid problems by following the parkrun code. 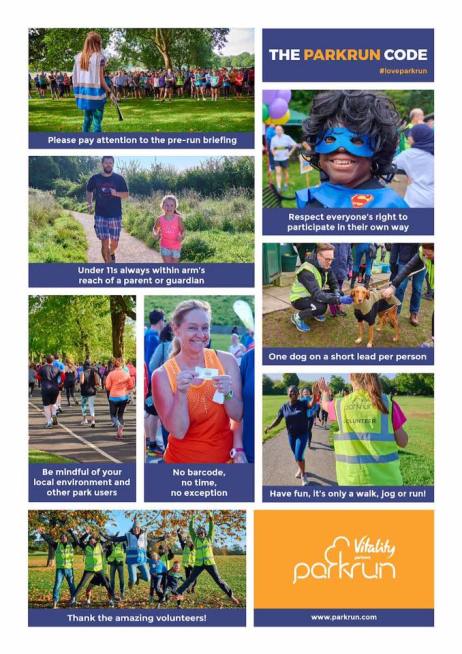 Also, Endcliffe park specific rules, keep right within the park, and left on Rustlings road. No running in the road or you will not receive a result, more importantly you might get run over, and jeopardise the future of the event by causing it to be cancelled, and where would be the fun in that?

Here’s a few parkrun resolutions for 2019 borrowed from our friends at Graves:

By the way, re point 3, we are more relaxed at Hallam, you don’t absolutely have to bring a dog with you, parkrunners are allowed to participate without a canine companion.  One looks fun though: 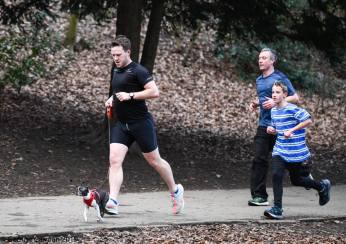 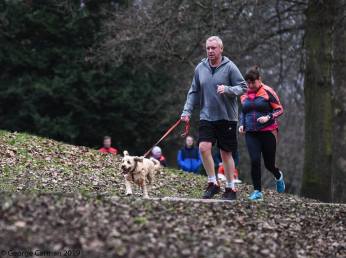 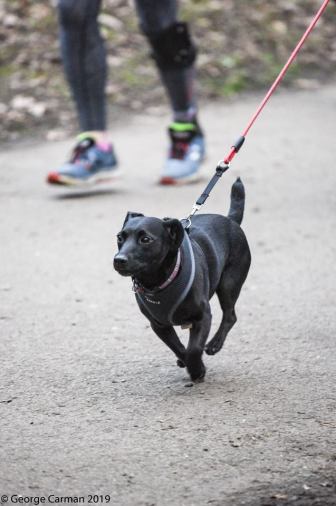 However, re other rule breakers, the volunteer team now have a spade as part of their kit to help dig a hole to dispose of the bodies of miscreants.  I’m pretty sure it’s getting to be standard practice now, by which I mean it’s required kit,  along with a defibrillator for new parkrun set ups.

Thanks to those of you who managed to contain yourselves enough to keep quiet during the run briefing, it is appreciated.  It is no mean feat to address 700+ runners, so even if you have heard it all before, please respect other participants and the RD by holding fire on your chit chat for those few minutes.  You may think you are whispering, but trust me you have a booming voice and besides, think how much more interesting your anecdote will be if the hearer has to wait another three minutes to hear its conclusion. The escalating frisson of excitement at delayed gratification will be its own reward!

Thanks to the volunteers

We are very grateful to the volunteers who made this event happen: 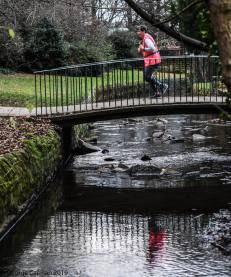 Thanks to all the volunteers, especially those who week in, week out, show up, smile and make this event the success it is.  This is not only the most desirable of clubs to join, but it’s an inclusive one too, so don’t be daunted, if you want to join the team of hi-vis heroes, you’ll be more than welcome.  Just send an email to SheffieldHallamhelpers@parkrun.com . You can also opt in to receive regular emails to let you know all about volunteering opportunities.   Simply open a recent parkrun newsletter, results email or volunteer email, click on ‘manage my profile’, then ’email options’, then select the events you’d like to hear from and click ‘save opt-in events list’.   Easy.  You might even get to brandish your own clip board one day!  I know, the sniff of power can make some quite giddy!  Exciting isn’t it. If you can handle a clipboard at parkrun, you can take on the world.

A few fun stats to get you in the mood.

With special thanks to Graves parkrun in general and Stephen Gilmer in particular for sharing the necessary excel wizardry to make such stats accessible.  The power of the pivot table was previously unknown to me but now?  So much fun!

Did you know that today we welcomed an amazing 86 people doing their first EVER parkrun!  Welcome to the world of parkrun, hope to see you all back soon.  I hope you all not only enjoyed your parkrun, but took part in the post parkrun tradition of coffee and cake or even brunch with friends old and new.  So a shout out to:

As if that wasn’t exciting enough, can we also extend a welcome to the 37 runners who visited Sheffield Hallam parkrun for the first time.  Hope you enjoyed your run and the delights of Endcliffe park.  Did you manage to spot the heron on the way round?  Sometimes you’ll even see a kingfisher if you are lucky, we don’t just have ducks on the ponds here.  Thanks for gracing us with your presence.  Special shout out to the NewZealand visitors, didn’t catch your names, but thanks for coming:

Everyone who took part was magnificent however, here are some, captured (metaphorically not literally) by our near ever-present photographer genius George Carman.  We thank you. 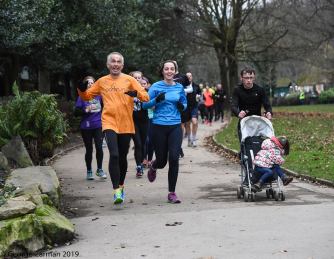 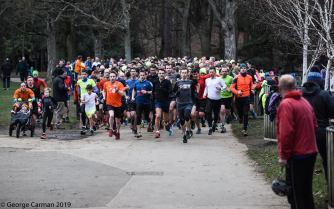 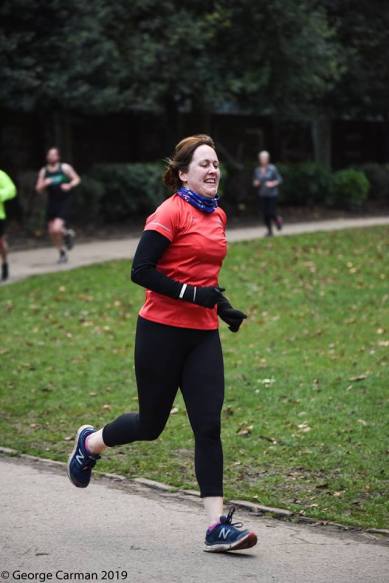 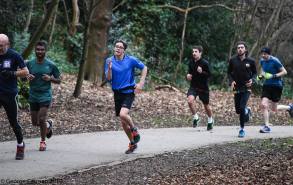 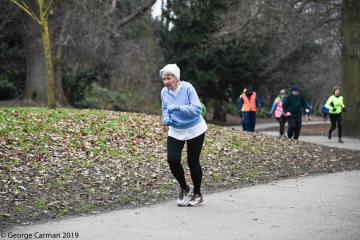 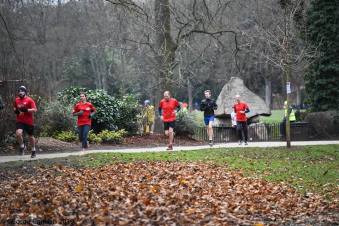 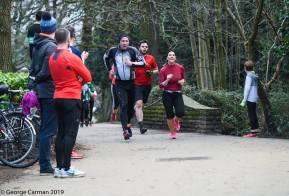 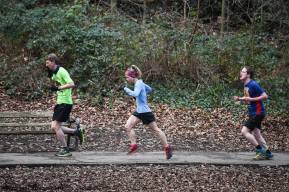 The photos give many insights as to what goes on at parkrun.  This is the secret of barefoot running – stay airborne!  Impressive indeed, by any standard. 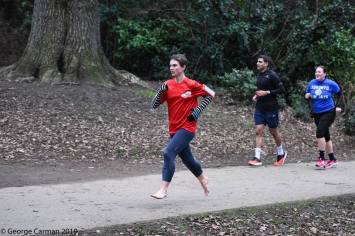 Some runners even abandoned any pretence of not seeing the event photographer and gave cheery greetings, demonstrating impressive multi-tasking with running and arm waving and even  broad smiles of acknowledgement and appreciation as they sped on by.

It is a run not a race, but in case you are interested, the first, second and third finishers were:

But let’s have some shout outs for random reasons that please me.  Specifically, on this Sheffield Hallam’s 421st event, the 421st finisher was Colette White.  In 75th position was Mark Ansell. This year is the 75th anniversary of the crash of the B-17 Flying Fortress, known as Mi Amigo, which crashed at Endcliffe Park, Sheffield, in 1944.  Ten were killed, and they are memorialised by the monument behind the EPIC café which has been tended by eye witness Tony Foulds for decades since, he saw the pilot ‘waving’ as the plane came down.  You’ll see him out there several times a week, keeping the spot tended and clean.  Say hello if you do.  Here are some of this morning’s parkrunners, including two actual American visitors with Tony himself at the memorial. 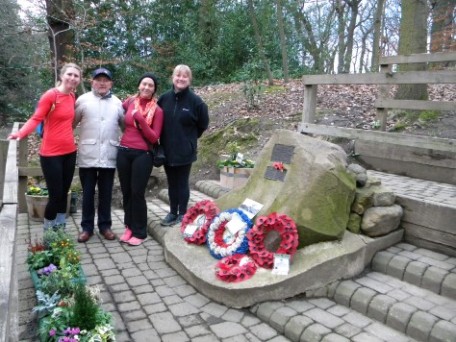 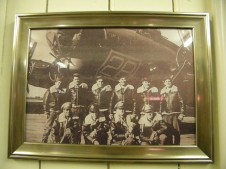 In homage to Tony, a shout out to all the other Tonys at Hallam today: Tony HALL, Tony LYELL and Tony WILLIAMS

There was also a Jessica Olympian sighting in the park today, so can we have a cheer for her namesake too:  Jessica MOHAN

Bravo to this week’s milestone runners:

Congratulations all.  We’ll look forward to see you sporting your milestone t-shirts in due course!

Whilst all parkrunners are intrinsically awesome, FACT, can we have a collective gasp of admiration for the two parkrunners who exceeded 80% in the good for age rankings.  For those of you now blinking cluelessly at your screens, all parkrun events use age grading to allow athletes to compare results.  Age grading takes your time and uses the world record time for your sex and age to produce a score (a percentage). This score allows you to compare your personal performance against other people’s performances even though they might be a different age and a different sex to you – the higher the score the better the performance.

Not everyone is seeking to achieve ever higher age gradings, but that doesn’t mean we can’t celebrate the following percentages.  Wow!

Dot KESTERTON with an astonishing 93.51 %, and the ever smiling Kate SCOTT with 80.21 %.  To put this in context, at Cardiff parkrun today Charlotte ARTER broke the women’s parkrun world record with a finish in 15:50 for the age category SW25-29 and her age grading was ‘only’ 93.47 %.  Go Dot! Dot was faster than the speed of light, so initially I thought she’d not been captured on film today, but it seems Mr Carman’s shutter fingers were even faster.  Here are each en route, storming it:

Thank you both for giving us all something to chase! 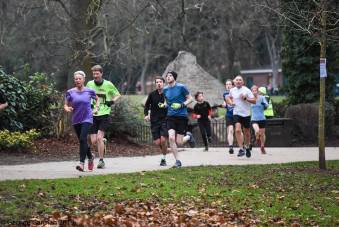 So well done everyone for turning out – what a great start to the year.  Here’s to a great year of parkrun fun for all in 2019.

I think we all deserve a round of applause for being awesome!  Here it is.

For all my parkrun related posts click here.  Or don’t.  It’s up to you.  You’ll need to scroll down for older entries though. 🙂

6 thoughts on “Sheffield Hallam parkrun 421, the Run Report that never was.”