Can you keep a secret? Life in a parallel universe. Strange but true.

I have no idea what has just happened to me.  But it began with the postman ringing my doorbell first thing (not a euphemism) and climaxed in my ripping open the post to unveil this: 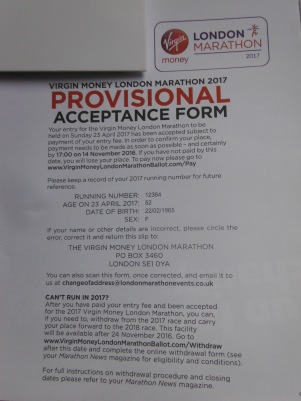 It took me a while to process what it was.  I mean, I knew that packs would be landing on doormats with the outcome of the ballot for the London Marathon this week, but I just assumed I’d be getting a rejection pack along with everyone else.  It honestly never occurred to me I’d get lucky, I just thought applying for a ballot place in the London Marathon was a rite of passage.  You know, you enter year on year for about a decade and after you’ve done your time you might get lucky once.  Consequently you do your one-and-only ‘never again’ road marathon around age 60, everyone claps a lot and then you get bragging rights but never have to run on a road again.  Yay!    I mean, I’ve always said if I was going to do a marathon, it would have to be London, but I wonder if that was partly because at a sub-conscious level it reduced the likelihood of me ever having my bluff called and actually have to do it.  I mean, what are the odds?*

Well, it seems that although I have never had a premium bond come up, and despite over a decade of membership of a lottery syndicate never won anything there either the running gods have on this occasion smiled on me. My number is up, quite literally.   OH.  MY.  GAWD!  I’I was provisionally in.  Now, at this time of writing,  I’m actually in, because I’ve now paid and had my email confirmation arrive as well,  which is the modern-day equivalent of getting a tablet in stone erected outside your place of dwelling.  It was only £39 to enter,  cheaper than the endurer dash I did earlier in the year which was a bit crap, but obviously rather more expensive than parkrun.  I think it’s worth it though.

At this precise moment I have absolutely no idea if I can achieve this.  There are some logistical issues around where I can train, but hey ho, I can’t let this opportunity pass me by, that would be nigh-on criminal, and surprisingly perhaps, once it dawned on me what the plastic cover contained I am so up for this.   Have you heard that thing about when you ask people for advice, it’s not so much the advice that they give you which is helpful, it’s how you find you react to it.  If you don’t like what you hear, you just keep asking other people until they give you a version of action that you feel you’d prefer.  If you keep asking more and more people, that’s a powerful indicator that you don’t like what you are hearing.  Similarly, if I’d opened the envelope and felt sick with fear at the very thought of turning up at the London Marathon and wished it had never presented me with the option of running it at all then I’d have quietly ignored it.  As it is, yes I am sick with fear as per the first part of the reaction, but nope, I’m not wishing this had never happened.  Au contraire.  This is potentially awesome, amazing, life changing (well, maybe not that exactly, but I think a bit of melodramatic exaggeration is permitted for the next hour or so at least).  I can’t not do this.  Well, I can, clearly, but I can’t not give it a darned good try.  Maybe I’ll get to be one of those annoying people who say ‘if I could do it anyone can’, only I’ll be marginally more plausible.  Equally annoying, but not unattainable as a role model.

I feel weird, because I don’t know if I’m deserving enough as a runner (blimey, look at the vitriol heaped on fun runners who made it through to the Percy Pud from certain quarters) but then again, why shouldn’t it be me?  Every dog has it’s day, allegedly.  Maybe this is mine.  I will take it seriously, but in my own terms.  I’ll be slow, but I want to do this, and thereafter make my fortune as a motivational speaker on the after-dinner talks circuit.  I fully appreciate that both parts of this aspiration are unlikely to come to pass.

Yes, yes, I’m terrified, yes yes, I’m already suffering crippling angst and performance anxiety, but you know what, if not now when?    I did the Sheffield Half unexpectedly, and although I fully appreciate this is an entirely other level of challenge, I did surprise myself by what my body would tolerate.  If I don’t try, I’ll never know.  Of course, the risk you take when you peer under any proverbial stone is that you might not like what you uncover, but hey ho, on balance I think I’d rather know.  Apparently it is better to have tried and failed as the saying goes… although Homer Simpson’s take on it has a more immediate appeal: 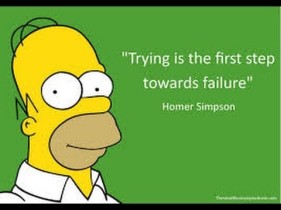 The only possible explanation for this delivery seems to me to be that I have entered a parallel universe where not only am I lucky enough to get a ballot place for the London Marathon, but I train for it, and accomplish this seemingly impossible challenge.

If I get even within sniffing distance of it, this won’t be me by the way, so you have been warned:

Even so, I think I’ll keep it close to my heart for now, don’t want external expectations to paralyse me entirely.  I wonder though, I really wonder.  What will I be thinking and feeling on Monday 24th April 2017.  Will I be reflecting on a race well run (or completed at any rate) sobbing inconsolably as a DNF, or never even have made the start line.  I wonder.  I have no idea.  Exciting though, isn’t it? Terrifying too, but what the hell eh…  can’t turn down a chance like that.  Absolutely not!  Oh crap.

*The odds of getting a place in the London Marathon are apparently as follows:

How many people entered the ballot this year and what was the chance of gaining a place?
A. A record total of 253,930 people entered the ballot for the 2017 Virgin Money London Marathon. We accept a total of more than 50,000 runners as we can predict, after 36 years, almost exactly what proportion of entrants will drop out due to illness, injury or other reasons before Race Day.

15 thoughts on “Can you keep a secret? Life in a parallel universe. Strange but true.”