Oh crap. This is real. Race pack has landed.

It has come.  More accurately, I have been reunited with my number for the Yorkshire/ Sheffield half-marathon.

It dawned on me a while ago that my number hadn’t reached me.  Although many of my running buddies were excitedly posting pictures of their newly arrived race packs, ripped open after tumbling through letter boxes.  I wasn’t overly concerned, I quite liked the comforting perpetual sense of denial associated with lack of physical proof that the Half Marathon is drawing ever closer.  Then I saw a post somewhere that said if you’d entered pre 22nd Feb then you should get your packs by such and such a date (early in March and long since passed).  I finally I realised that maybe, just maybe, I should be a bit proactive about things, and see what might have happened to it en route to my residence.

I emailed the nice people at the Yorkshire Marathon team, and explained my dilemma.  I was now panicking about the non-receipt of my race pack, and would like to replace that current state of panic, with a new existential terror about having to run the darned thing instead.  They responded pretty swiftly, I should indeed have received it by now.  However, they could reissue, if I’d just confirm again I hadn’t received it.  So that was fine.  Except I had a thought.   I wonder?

I live in a building converted into flats.  People come and go, junk mail accumulates like snow drifts in the hallway, and former residents who either never used redirection services or whose arrangements have long since expired, continue to get post for years and years after moving out.  Periodically, mail fairies jettison some of this excess.  There is a large plastic box that appeared by magic in the hall way some years ago, and it is there for the express purpose of dumping unwanted or unhomed mail as a temporary holding pen until someone works out what to do with it all.    I myself have even been known to forage through this box now and again.  Sometimes to retrieve and forward on or return to sender items that look important.  Sometimes out of nosiness.  Why lie?  Of course I do – though I have been well brought up and never open anything, I have been known to hold things up to the light – well you have to don’t you, to see if something needs to be returned to sender or can reasonably be jettisoned.  I do this for the public good…  Sometimes, this mining is actually  necessary to see if something I was expecting has in fact been misdirected into this sink hole for unclaimed post.  The sink hole looks a bit like this, only with more postal items and junk mail occupying the space, so it’s quite an operation to excavate it. 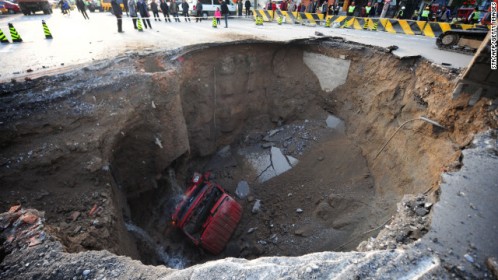 Yesterday was such an occasion.  I wonder…

I emptied the post pile onto the communal hall floor and went through every single pizza delivery service flier, Christmas cards from Nick Clegg, free newspaper and TalkTalk bargain price offers.  Like an archive historian I marvelled at this documentary record of former tenants who have long since been and gone.  It felt a bit hopeless as I excavated each successive layer unearthing earlier and earlier eras of residence  However, eventually, and remarkably, I did eventually hit the dubious jackpot.  It was there!  Against the odds, I had located it.  Hooray.  A thin looking envelope, albeit a large one.  I can see why it might have been categorised as junk mail by a neighbour in my absence.  I ripped it open and OMG (get me and my text-speaking yoof jargon), there it was. My race number.  This is real.

I replied to the nice people at Yorkshire Marathon (thank you Elliott) and said that I’d now been reunited with number.  I might have glossed over the ‘it was here all the time’ aspect of it all, didn’t want to draw attention to my own stupidity, but all’s well that end’s well eh.  Now I really don’t know what to do.  To run, or not to run, I have no idea, after all this faffing, and so late in the day.  It’s ridiculous.

The problem is, I have this poorly knee still.  I’ve never had knee problems in my life before (apart from breaking one years ago by running into a brick wall, but that was different and also the other knee).  My head tells me I probably shouldn’t run.  My heart tells me ‘what the hell‘.  I am completely resting at the moment, but this path leads to mind games and mental torment.  Too much time to think?  I seem to wake up every morning with a new niggle, ailment or cause of panic.  I really don’t know if I’m becoming a hypochondriac, or whether I’m just hyper aware.  Maybe I’m resting too much?  Shoulder’s hurting, the calf in my other leg is all stiff now and this morning I was just exhausted for no reason at all.  Is this normal?  Is this part of the taper experience and why tapirs are better role models than actual athletes as a spa and (another) nap might help more than worrying about having to run all the time?  I honestly feel like my body has started to fall apart since I stopped running.    According to Run Britain (What Could Possibly Go wrong) a good taper allows you to arrive at the start line feeling ‘fresh and feisty‘.  I know, sounds great.  But also right now completely implausible. I just feel sluggish and slack.  Surely not how it’s supposed to be?  I found this, apart from the Americanisms (for which I apologise to my British reader ‘sneakers’ are not a real thing, not in the UK) this looks a bit of a familiar check-list.  So maybe all that I describe is normal and proportionate after all.

I can’t right now imagine walking to the corner shop without a limp, let alone voluntarily running for miles and miles more than seems sensible.  Plus it is currently hailing outside (no really, it is) what if it does that on Sunday?  I’ve supplemented my training and tapering regime with Googling race tips.  A whole new source of angst.  Chaffing and nipple blisters are only the start of it.  Add in falling over, being sick, getting the runs (but not in a good way).  What was I thinking when I entered?  I have absolutely NO IDEA!

Another cause of angst is race nutrition.  I never eat when I run, never ever, and because I’m so slow and do a lot of walk/running, I’m often out for up to 3 hours and haven’t had problems before.  However, a few wiser runners far more experienced than me have advised that if you are going for more than 90 minutes (and I will be out for a lot more than that) it is a good idea to have something.  Also, even if I don’t feel like I need it, the psychological lift of ‘rewarding’ myself with something when I reach say the Norfolk Arms (round about the half way point and  at the top of the Killer Hill) would be good.  The problem is what to take?

Bit late in the day to practise with gels.  I am vegetarian, so don’t really want to opt for jelly babies.  I have been known to eat them (Round Sheffield Run had them at feed stations, and I did need something then – I even enjoyed them, but then felt really guilty afterwards).  I’m not a total purist, and would eat jelly babies in a survival situation, post an apocalypse or indeed at point of collapse on a run say – but I don’t feel comfortable using them as my default energy plan.  I scoured supermarket shelves for alternatives/.  I can’t cope with the nutrition bars mid run, and some of the sweet options looked like they’d just be a congealed mess by the time I got to them on a run.  Melt in heat, dissolve in ran, too hard to open, too unfamiliar.  This was way harder than I thought.  Bananas were offered on the Round Sheffield Run feed stations, but I can’t digest these, also can’t imagine how you’d carry them whilst running, nor the consequences of discarding the peel en route (actually, I can imagine that bit very well, slapstick running humour in the extreme, but not public spirited)…

In the end I came across these.  An extreme sugar hit, not seen them before, but they look relatively innocuous – as far as uber refined sugar can ever be called innocuous I suppose.  Not so tempting I’ll eat unless I need them, but will do the job.  Also, small enough that they will go into my sleeve’s zip pocket, which is only carriage option unless I put a saddle bag on Roger, which I don’t want to do.  I probably ought to try one of them prior to Sunday, but can’t face it.  Contrary to public opinion, I don’t have a really sweet tooth, carbohydrate definitely, cake now and again certainly, but pure sugar?  The thought makes my teeth vibrate.  Still, they look jolly, and I think the cow is for decorative purposes, not to indicate that the package contains beef.  (In Vietnam you see shop fronts adorned with happy looking healthy dogs… these are not poodle parlours, but restaurants where dog is the speciality, so I now regard packaging as always potentially open to more than one interpretation…  Be careful out there).

Think that covers it….  Just remains to be seen if I have the nerve and audacity to turn up on the start line.  Jury still out on that one.  We shall all find out together.