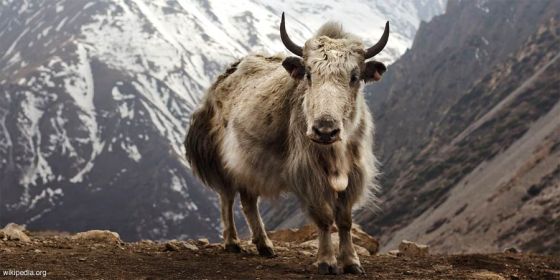 I wasn’t going to do a blog post today, I’ve been over-communicating lately, and it was only the standard yomp up the valley, so not sure that there’d be all that much worth reporting on that…  and then we had such a hilarious hobbit harrier outing it seems a shame not to document it.  Plus, I know how dependent some people may have become on my training Top Tips, and there were some corkers today that it would be criminal not to share.  Today I will be covering footwear; social running etiquette; random technique tips; posing for action photos and feeling old because of fly-tipping.

So hobbit hashing duo only today for our morning run.  It was good we’d previously arranged to meet up, as my enthusiasm waned a bit after the weekend.  The lovely snow has mostly melted away so it’s more slush and so dark outside it feels like you are moving around in a virtual reality black and white painting. Strange really.

Footwear: Despite the unpromising conditions, on the plus side, this gave my hobbit companion a chance to try out her new yak traxs.  These are a device not so much for the tracking of yaks, but sort of spikey things that you attach to your shoes to stop you slipping in the ice.  Apparantly for a brand name you can pay up to £13, clever hobbit got hers for £1.99 on ebay, but in fact the cost has now crept up to the eye-watering, life-changing price of £2.99 – presumably some opportunistic pricing based on the sudden cold snap, still you can’t put a price on your own safety can you?  Anyway, she yomped towards the meeting point positively beaming with enthusiasm.  The coil grip treads made a sort of crunching sound as she walks, no chance of creeping up on anyone. They were perhaps less than ideal for the tarmac pavements, but as soon as we got the muddy and icy trails they were brilliant. Well, brilliant for her, as no sliding or slipping, less so for me as I lost that entertainment outlet.  Don’t worry though, we substituted with other play innovations to keep us laughing throughout.   Meantime, here are some shots of her not slipping: 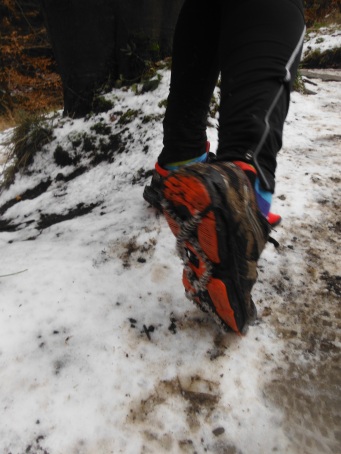 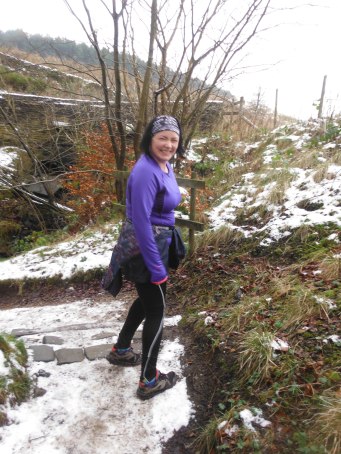 Social running etiquette: as I think all but the most solitary of runners would acknowledge, one of the best bits about having a running buddy is the companionship of conversation as you trot round, seeking advice, solace or amusement as part of an holistic running experience.  So I naturally used the opportunity to explore with my hobbit companion the dilemmas of multiple running group membership.  Is it positive networking, maximising running opportunities and spreading the joy?  Is it prostituting yourself to all and any that will let you across their running threshold?  Is it disloyal moonlighting?  Who knows.  The upshot was we seemed to agree (I think) that it’s OK as we run with different people and groups and in different places for different reasons.  Sometimes we need to stick with our own kind in terms of pace, other times its more social.

What was hilarious, was just as we debated whether or not we should have told other potential runners about our pair run in the interests of inclusivity, or whether it was OK to just head out together because that was the least complicated way to tackle it, we came upon two other fellow Smileys, who had similarly headed off on their own (with Lewis).  They are faster than us, so although we have run together previously, in various combinations, indeed on this very route, and we were clearly heading in the same direction today as well, it made sense to stay in our distinct pairings.  We did bump into each other at intervals as we sort of leap-frogged one another all doing our own thing, and it was most jolly too, but we did so without any pressure to stay together, mutually fabulous.  What I found really funny though, was every time we saw them, they appeared to be either standing leaning against a fence chatting, or actually sitting down chatting, and there was very little evidence of them having done any running at all.  They must have done, because they were always comfortably ahead of us, and to have made it to whatever bench minutes ahead of us they surely exerted themselves to get there in the first place.  Even so, you couldn’t be entirely sure they hadn’t just found a way to teleport from one location to the next, I’m left with some doubt…. Look at Lewis’s eyes too – you have to admit they have a sort of other-wordly look to them in this shot at least.  I’m just saying. 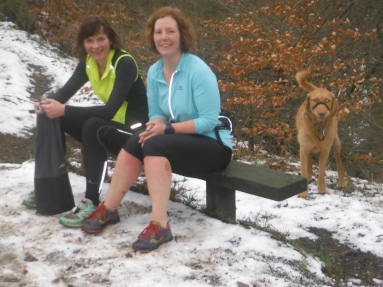 However, as the saying goes, what goes around comes around.  As surely as we were able to raise an ironic eyebrow at our laggardly friends, we too were massively caught out.  Deep in conversation we were walking up a steepish part of the Clough, when suddenly there emerged a scout Smiley, quickly followed by a gaggle of giggling others galloping onwards and upwards.  Regular readers will know I have always had a suspicion that there are designated Smileys detailed to lie in wait for ‘runners’ who slack off at this point on the run.  I feel pretty confident that whilst they may well have caught us slacking, we caught them getting into position to jump out of the undergrowth and appear to be magically sprinting downhill or up as soon as any other leaden Smilies started to come into view.  It was extraordinary though just how many of us were out and about at the same time.  I blame Smiletastic, it’s certainly got me up and out and up again.  We tried to keep up with them for a bit, but it was like trying to swim alongside a turtle (I imagine),  we did OK as they slowed to pace with us, and kept them in sight as they basically floated effortless in the sea currents,but then one flick of their flippers (turtles) or push off from the ball of their foot (runners) and they disappeared into the mist and trees.  Go Smilies! 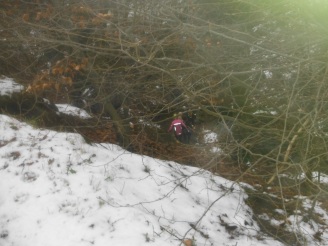 Posing for action shots: now we have come up with a strategy, it seems to me to be absolutely incredible that we hadn’t come up with this before.  You can learn from our mistakes, I know, hard to express your gratitude.  We got to the sledgy hill, which is indeed very steep, and after a conversation about how this would be a great test of the yak trax, and further debate how great it would be to get some action shots of us running up and down the hill, we lamented how all action shots can basically make you look completely shite.  That’s when we hit on the perfect solution, we’d just recreate positions to make it look like we were running, and see what happened.  You must have seen it done before, like when people just lie sprawled and crawling on the ground, and rotate the photo, and the image makes it look like they’ve been rock climbing some vertiginous slope, you get the idea.  Anyway, here are some we came up with.  You can use your skill and judgement to work out which are for real and which are erm, let’s say artistic representations of our inner athlete.  I think we did well – on both counts! 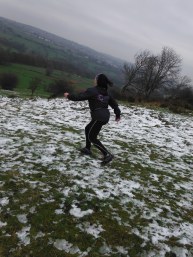 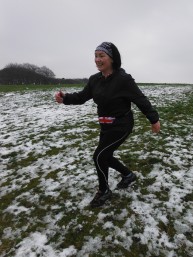 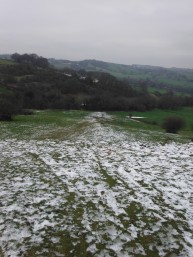 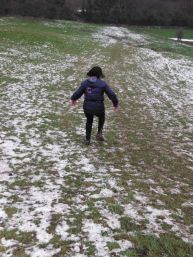 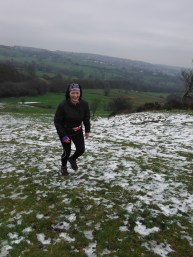 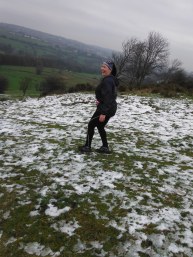 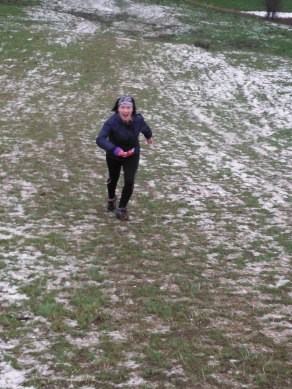 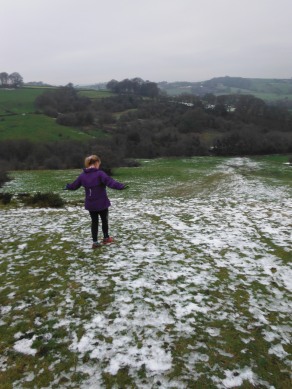 Random technique tips: I think we’ve already covered the value of the yak trax imitations.  Many of you will already have come across fartlek.  This is the Swedish word for ‘speed play’ and is basically interspersing your training runs with different speeds – a cross between interval training and continuous running.  It is a totally genius training technique that will work for anyone.  It helps more experienced runners, because as a method you will build speed and strength as your body doesn’t get stuck in a plateau.  It is a very efficient way to train.  It is possibly even more genius for less speedy runners.  This is simply because when you are spotted, oh, I don’t know, let’s say randomly walking up a hill and find you are caught out by  the super-keen and fast contingent of your running club coming galloping up behind you catching you unaware, you can pretend that you’ve just been doing fartlek.  They won’t necessarily believe you, but it avoids the embarrassment of any confrontation, and everyone can go their separate ways dignity in tact, which is the main thing.  So that’s fartlek, but have you heard of actual farting training?  No?  Well check this out, don’t care if it’s true or not, coordinated trumping, or as headlined here ‘timed farting may improve your running pace‘ completely brilliant.  Why should yoga and pilates people have the monopoly on flatulence in training?  It seems a dis-inhibited approach with the wind behind us might rocket propel many of us to a personal best if only we embrace the science.

and finally Feeling Old because of fly tipping: so we’d had a really lovely run, and no sliding, though there was one nasty ankle turn which caused an anxious moment, thought I’d broken my hobbit friend and would have to carry her home.  The pain passed though.  What was awful and made me feel old, was that our lovely run was ruined when we came across a pile of dumped builders waste, completely blocking the path.  It was so depressing, not only unsightly, but dangerous, with nails projecting and causing environmental damage as some of the pile had tumbled into the brook.  Why do people do that? It must have taken quite some effort to hoik it up there.  I was really outraged.  What made me feel old, was that I took to photographing it so that when I got home I’d be able to contact Sheffield City Council to report it, which I did.  It occurs to me that is the behaviour of a grown up, I do have a ‘responsible adult’ mode at times, certainly an indignant one.   It cast a bit of a shadow of the end of our efforts as it is basically like having someone crap in your front room in my book (I imagine, that hasn’t actually happened to me, but I wouldn’t like it if it did!).  The only point I have to make in the interests of completeness, is that hobbit buddy twisted over on her ankle after this discovery.  This led me to contemplate the ethics of either using the rubble to create some sort of raft in which I could float her down the river, or possibly, if she’d really hurt herself, to bury her underneath in order to avoid having to dispose of the body myself.  Does that make me a hypocrite, or just very pragmatic?  Who knows.  She’s fine now though, we’ll probably go out again next week to be honest, I’ll try and sneak another photo of her in the next blog just so you know she’s OK. 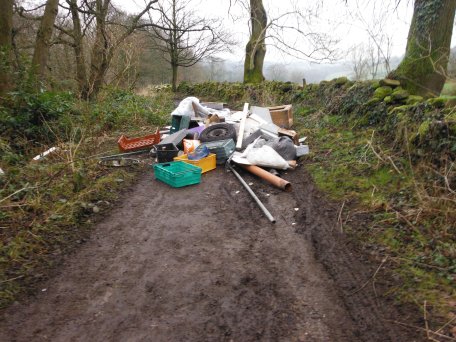 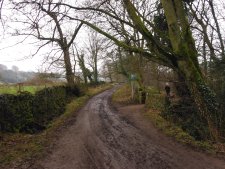 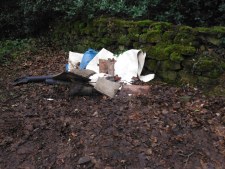 Jogging on, back at forge dam before we knew it, taking in the local trails, admiring again the Christmas baubles, and taking a cut through by the frozen water pool behind the Oakbrook coffee shop.  Another run down.  Yay!  Worth the effort of leaving the house. 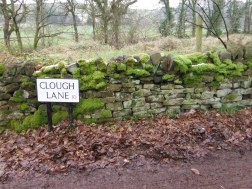 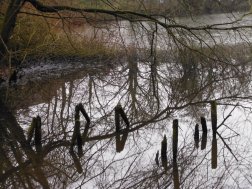 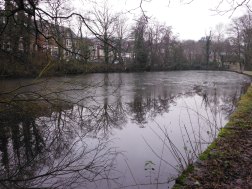 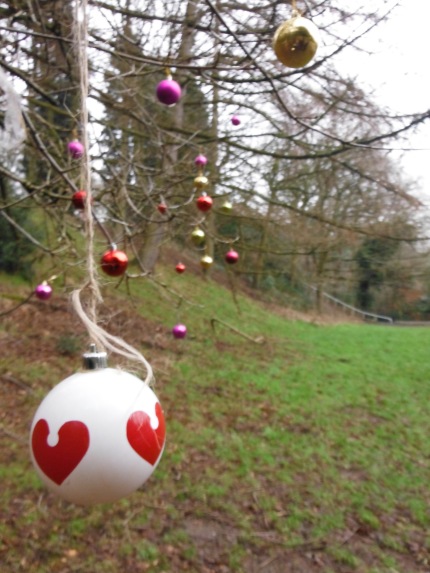