The peculiar pleasures of Parkrun

I love Parkrun, I really, really do.  But I am only mortal, so I still found it incredibly hard to heave ho myself out of bed this morning to get there.  A combination of factors were influencing me, specifically: warm bed, cold outside world; sore leg (is numbness to be my new normal?), temptation to pretend I need to rest up and taper before 10km tomorrow; and, if I’m really really honest, the fact that my usual running and breakfast buddies may not be there.  One is off on a cycling weekend, the other has temporarily dropped off the radar.  The dire consequence of this is that I might turn up for a run and not get to have a post-run breakfast and catch up afterwards.  Also, crucially, no-one will notice I’ve not been.  I wonder if this is some variant on the ‘if a tree falls in the forest and no-one hears it, does it make a sound?‘  I still don’t know the answer to that philosophical conundrum, but I do have an inkling that ‘if I go for a run and none of my immediate social circle witness it, then that may be wasted effort’.  Eventually I decide if I don’t go I’ll regret it, and also I need to test out my leg, if I can’t do 5km today, then 10km will be a problem tomorrow, and besides I always feel the better for it – afterwards.  Also, today of all days I can pootle along at the back as it is legitimate to take it easy the day before a race (though who am I kidding, I never really break a sweat at the best of times!) 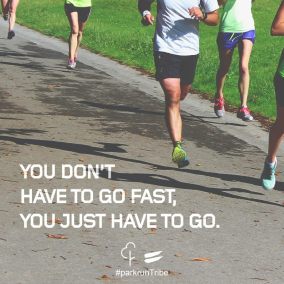 So I head off, it’s only a 15 minute walk for me, and is lovely out, properly autumnal.  Falling acorns make popping noises behind me as I go through the wooded parts on the way to the start.  Today I did consciously break my routine a little as well.  I have decided if I can’t improve my running technique, I should at least work on my toilet training, and exercise a bit more bladder control.  I resolve that today I shall not have  a precautionary pee.  I can’t possibly really need one 15 minutes after leaving the house, it is bad for my pelvic floor (see earlier entries) and anyway, there is never (or very rarely) any toilet paper in the loos in the park so it isn’t an entirely relieving experience to nip in there each week.

I don’t immediately see many people I know, but I’m a bit earlier than usual.  I see our friendly photographer with one of his adorable daughters who is wearing the best hat ever, it looks like a wolf’s head (though I am later corrected on this, it is in fact a husky).  Genius.  She has an enormous camera as does her dad.  I wonder what they will capture en route.  One photographic coup of the day is that they actually take pictures of each other, the camera lens turned, a possible first! 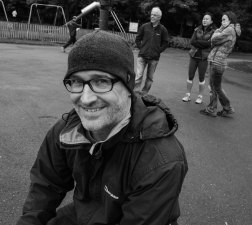 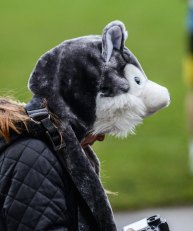 Waiting in the start funnel I am very relieved to see one of my breakfast/ running buddies who has come out with her daughter.  Things are looking up!  There is the usual spiel (thank volunteers etc) then gooooooooo, and away we go.  It is quite nice to be at the back and feel legitimately for once I can take it easy.  I do my usual thing of eavesdropping on other people’s conversations on the way round.  Sometimes it helps my technique or motivation if I hear adults giving tips to their children (land with your foot on the speed hump going downhill so you don’t fall over was a good one).  Sometimes you just get a little snapshot of someone else’s life.  My favourite ever conversation catch was actually at Bushy Park Parkrun ages and ages ago.  Two friends were running, talking about another mutual friend of there’s who was due to be running in some insane ultra ultra marathon with his girlfriend in a few weeks time.  I’m sure they said it was 400 miles, but really, is that even possible?  Anyway, as I understood it, it seemed that their friend was considering waiting until the end of the run and then surprising his girlfriend with a marriage proposal.  The two of them were discussing the relative merits of this with some seriousness and then fell into silence.  Eventually one of them said ‘the thing is, that sounds great and romantic and everything, but after all that running if you knelt down to propose traditionally you’d never be able to stand up again, afterwards would you.  How would that work?’  I wonder what happened…   I shall never know. 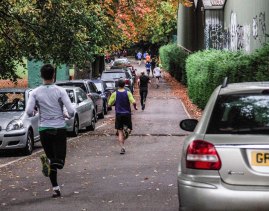 It was an unremarkable jaunt round the Sheffield Hallam route today.  I did narrowly avoid tripping over a Yorkshire terrier on the first circuit, only to nearly collide with the same dog again on the second lap.  It was just a member of the public (as opposed to a Parkrunner) quite reasonably walking her dog, but for some reason it ran away from her side and out in front of me twice within half an hour, it was very strange, it didn’t seem to risk collision with any other runner.  I fall over quite often enough when running without having to hurdle canines too.  Jogging along at the back meant that I got monumentally lapped by the faster runners completing the route before I’d finished my first lap.  They fly past, at least they have the grace to look like they are working hard, but my, it’s impressive. 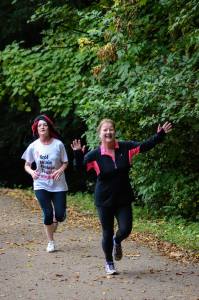 On finishing, I located my breakfast buddy, and we stood at the finish clapping in the final runners for a bit.  That was a lot more fun than actually running to be honest.  It’s great seeing others reach the finish, kids sprinting on sight of the end, first timers practically collapsing with relief.  Most seem cheered by the encouragement.

I think we probably did inadvertently clap and cheer a couple of people who weren’t in fact park-runners at all, just random joggers.  Maybe their slight look of bemusement should have been a clue, but I say, who wouldn’t welcome being cheered as they went about their daily business, it would be great for anyone’s self esteem.  Imagine how great you’d feel if every time you arrived for work your colleagues gave a great cheer of enthusiasm just for your very existence!  In fact, it was that thought which made me complete a random act of kindness later on in the day.  I was renewing some insurance, and the woman on the phone asked if I’d mind completing a customer service survey at the end of the call.  I could  hear in her voice how much she hated making the request, and quite probably a job too.  I’d hate to work in a call centre, anyway, I just replied to the survey saying how wonderful she was just because I could.  She wasn’t bad actually, but the questions in the customer satisfaction survey imbue the purchasing of household insurance with a level of emotional engagement that I find it hard to relate to.  I hope some positive feedback might make her day a bit more bearable in these dark days of customer feedback and endless performance reviews.

I digress, my friend’s daughter – who we’d been looking out for, appeared from the other direction having completed the run ages ago.  This meant we could do the bit about Parkrun that I unreservedly look forward to.  Off for the earned cooked breakfast.  Scrambled eggs on toast and a full fat latte.  Yay!  Of course I was glad I went.  I love Parkrun, everyone should do it at least once,, it makes all right with the world, it really does!