You’d think by now I’d have worked out that the clue is in the name.  Hope over experience means I keep turning up, but somehow I’m always a bit surprised when after the initial ‘hellos’ and social catch up, we are required to actually start running.  Hence the slow on the uptake heading.  I really shouldn’t be so affronted week after week at the expectation that we are all going to have to pick up the pace a bit, dark, cold, wet or otherwise….

I had my usual inner battle as I peered through the skylight in my attic flat looking into the gloom.  It was spitting a bit, and looked really, really dark.  However, even though I don’t ever really look forward to going out for a run I never regret going afterwards.

I’d love to know if others have my inner struggle with motivation.  Is it just me, or do we all collude with each other in presenting a united front of cheery enthusiasm for heading out into the night.  If I look on the club Facebook page on a Thursday it is full of protestations from people apparently genuinely gutted at being unable to run due to reasons various including:  injury (that’s bad); having to go out with friends and family for some sort of mandatory communal celebration; (tough call, which is least worse/better – go for a run or attend tense family gathering?) babysitting (poor excuse, I thought that was the point of calpol/ gin and or sullen teenagers); being stuck at work.  Occasionally, there is a genius apology for non-attendance, my recent favourite was along the lines of, ‘I can’t make it tonight I’ve got some Christmas cakes in the oven and I can’t leave the house ’til they’re done’.  I was soooooooo tempted to add  comment ‘I can’t come tonight, I’m binge eating a bag of donuts and watching Great British Bake Off on BBC iPlayer’.  I don’t quite have the nerve.  Bet if I did though, there’d be a few surreptitious likes!

Alongside all the apologies, are cheery ‘I’m in, yay!’ typed comments.  I’m always guilty of stalking these.  I like to try and see if there will any other slowbie runners to keep me company at the back.  I don’t mind being last, I really don’t, but I do mind being so slow I hold others up.  It gives me flashbacks to situational angst at being crap at sport at school, last picked for teams in ‘games’ (what a misnomer is that) and that general sense of public humiliation that I’ve never managed to rid myself of since.

I do go.  The assembly point last night was in a park car park.  Millhouses actually, if you care.  It is really, really dark,  Were it not for the flashes of reflective gear it would have felt utterly deserted.  I was among the first to gather.  It felt a bit sinister, standing around waiting, unable to make out each others faces. It was like we were preparing for some hostage exchange or something.  People continued to gather, there was a fossicking for clip-boards, signing up for groups and catching up on injuries etc.  I bumped into people from last week’s fell race, the endure dash and people who are planning next weekend 10 km, the TenTenTen.  It amazes me that I have somehow infiltrated the running community from such an unpromising place, but it is comforting that I am getting to know a few people, and hopefully they will recognise me too.  This means they are less likely to run past if they see me lying face down in a bog somewhere whilst mid-course at a race event somewhere.  Who knows, they may even attempt to retrieve me, or at least notify the race marshals at some stage on the route.  Actually, on reflection, that isn’t altogether true.  As I’m invariably behind them, they probably wouldn’t ever see me, unless it was a two loop course I suppose, then they’d lap me eventually, oh well, the thought was comforting whilst it lasted.

So after a bit of faffing, we split into four groups, and I took the register again for the Foundation group, not too bad this time as only five of us, that’s only the fingers on one hand, so not too scarily responsible a task for me to take on in the way of counting.  This time, there were even clip boards, brandishing that AND wearing a hi viz reflective jacket there is no task I could not have undertaken with confidence.

This time, it was a pace run, so straight out and straight back.  The speediest group headed off first, followed by the second speediest 10 seconds or later and so on. This meant each group stayed together without overlapping, making it easier to keep a track of everyone.  It is quite clever really, and a great testament to the fabulous Smiley leaders who week after week rise to the practical and logistical challenge of getting us all out and back safely.  The plan was basically head out and then at 7.35 p.m. turn around and run back again.  The road was pretty dark and I was glad of head torch.  In our group people chatted companionably about injuries.  I find this quite comical, not that people are hurt, that’s horrid, but how we all give each other advice that we wouldn’t follow for ourselves.  Our leader is a case in point.  She has had an injury for some months now, and pain seems to be constant, but she shows no sign of either resting or getting any physio help in relation to it.  Another runner has badly sprained her ankle a few weeks back.  She states it hurts pretty much all the time, but she feels after resting it for a while that is inevitable when she gets back mobile again – muscles have wasted a bit after all.  This may well be true.  She also says that sometimes when she runs she doesn’t notice the pain so much anyway.  Our leader comments with concern.  ‘You have to be so careful with that, the endorphins that kick in when you run can disguise the pain and then you can really cause harm!’  Pots and kettles methinks, pots and kettles.  I’m just saying.

Half an hour running continuously was more than enough for me.  I was quite relieved when our outward time was up and we could turn around and head back.  I was tiring by then, and one of my legs started to really hurt.  It feels a bit of twanged to be honest.  I’m a little concerned, because it is the same leg and the same pain that I got when I skidded rather spectacularly on a ‘recovery run’ (I know, the irony isn’t lost on me, bloody recovery runs, terrible idea…) and pulled all my hamstring and couldn’t walk for a fortnight.  I really, really hope it isn’t a reappearance of that.  Maybe I should have rested my legs a bit more after all that off-roading over the weekend. Eeek.  Too embarrassed to pull up, I just slowed at the back, we were nearly home anyway.

The planning worked really well, we were fist home, and then the other groups in reverse order.  It was quite fun watching them come in, the little head lamps bobbing up and down, it looked like a shift of miners emerging from a pit hilarious.  A few minutes later, people ticked off the registers, thanks and goodbyes exchanged and everyone scattered off into the dark of the night once again.  It was as if we’d never been there.  Weird, and spooky even.  Home now home then to watch Hunted (final episode, much excitement) and enjoy the feeling of smugness that only a run can bring….

… and also not to enjoy the growing sense of numbness that was moving through my leg.  Ignore or not to ignore?  Ignore I think, then maybe it will just go away, I’m pretty confident that is what all the more experienced runners do, and they must know what they are doing by now, surely? 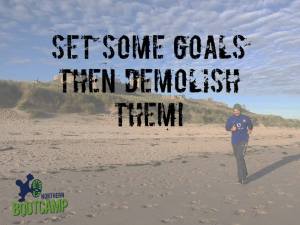