So it’s Friday, so that means my dance exercise class has come around again.  Is it just me, or is there not something hilarious and side-splittingly funny about the whole adult exercise class concept and execution?  Random individuals gathering in sports halls and studios across the land, fighting age and gravity in pursuit of raised cardio activity and tauter toned physiques.  Surely a manifestation of the bottomless (if misguided) optimism that occasionally seizes us all in our struggle to keep (or get) fit.

This particular class is held in a small studio with full length mirrors, which is part of a wider sporting complex.  I arrive, shuffling in self-consciously at the back, having already met a couple of other class-goers in the loos.  We are variously complaining of both ailments (bit run down, tired, you know how it is) and digestive challenges (why is cheese so hard to process now I’m older/ I shouldn’t have eaten so close to exercise).  Personally I am suffering on both counts.  My leg still feels strangely numb post yesterday’s run out, and in addition, that lentil and quinoa soup I had earlier (no, I really did, I am a very healthy eater, it’s just I have never really grasped the concept of portion control and I tend to eat other stuff on top, oh well, we all have to have our weaknesses, lack of will power is just one of  mine) has led me potentially to windy city… not a promising start to the class.

It was quite nice to be back though, our fitness instructor is as always smiling hugely and welcoming.  I don’t know how she does this, she is a whirlwind of energy and smiles.  Has she found a human version of catnip?  Is it genetic?

I found myself sort of hugging a wall and trying to disappear into it.  It is so weird, that childlike thing that all of us in this particular class seem to do, not wanting to be at the front.  We seek to make ourselves invisible – perhaps because we are self conscious about both our athleticism (not enough)  and our bodies (too much).  I am certainly, and it seems  probable my fellow groupies feel likewise, so we lurked around the edges, even though this is  clearly ridiculous.  You can’t hide in a studio box, especially one with mirrors on one side, windows on another and with such tiny dimensions that even we ten or so attendees constitute a crowd.  I chatted to one woman who I’ve noticed has come a few times too.  She was debating whether or not to wear trainers for the class – there is quite a lot of toe pointing.  I told her I have to, on account of the arthritis in my feet.  I just came out with it and then felt ancient and decrepit at my confession.  I can’t risk going up on my toes in bare feet because I feel the bones in my feet disintegrating as I do.  I wondered if I’d over-shared, so to break the tension I just told her that I was OK with recognising that my dancing career probably wasn’t going to take off at this point (due to age not talent, obviously), but I was happy to just focus on my running  instead.  We both laughed.  In fact we bonded, she told me by way of exchange of her own running catastrophe earlier in the week.  She went out for a run, long enough to be knackered and feel quite smug,  and then on return to her car she realised to her absolute horror, that she’d dropped her keys somewhere on the route.  She had to do the whole thing again.  To make matters even worse, when she did spot them, they were in the hands of another runner who’d thoughtfully picked them up.  This meant she had to do another sprint to catch up with him.  He was a really good runner.  I felt her pain. 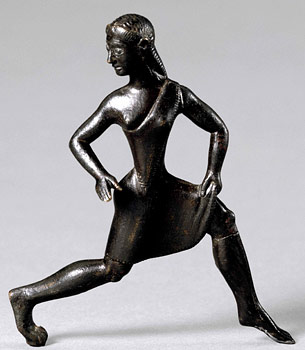 So we embarked on our flailing around, trying to stand and balance on one leg, gyrate our hips, and follow the uncertain rhythms of the rather abstract music which was ‘modern’ and discordant, and don’t even know what word to use to describe it’s genre. The instructor executed each move with poise and vim, the rest of us stumbled about in her wake.  At one point looking at our collective reflection in the mirror I would swear not one of us was facing the same way or doing the same move. Imagine a group of kids of all shapes and sizes in say pre-school, (at an age when they haven’t fully learned to either follow instructions or co-ordinate limbs properly) trying to work out a routine to Michael Jackson’s Thriller, and you might get some idea of the image reflecting back at us   Inevitably there were one or two amongst  the group with some innate ability and flair, but they weren’t enough to distract from the endemic ineptitude that surrounded them.   It was hilarious.  I don’t mind at all being so rubbish, but I am amazed that our instructor doesn’t find it more dispiriting.  The main thing though is to keep mobile, and have fun, I can at least do that.

It is only a 45 minute class, but I was exhausted by the end of it.  My leg didn’t feel particularly worse at the end of it, and I was glad I went,  Another class down.  I wonder if I will ever get any more supple or balanced over time, but regrettably, the only way to find out is to stick with it.  Watch this space….